Enter your City name or Pincode

Bomdila is an ideal place for summer holidays. The place is abundant in scenic beauty. It is a mini paradise with apple orchards, snow-capped Himalayan peaks and magnificent view of the Kameng valley to attract tourists. Bomdila is an ideal place for trekking and hiking too. The town of Bomdila, known for its intricate scenic beauty, has many beautiful tourist spots. 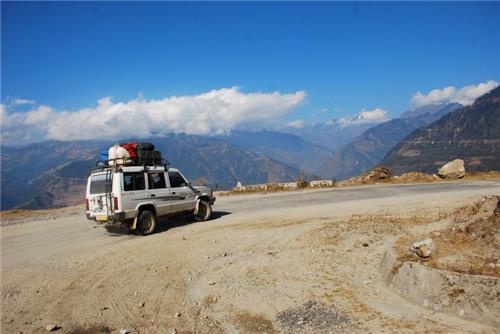 There are wildlife sanctuaries like the Pakhui Tiger Reserve famous for the carnivorous species found here. There are also religious tourist spots like the famous Bomdila Monastery which has many followers in the town. Every year many religious activities take place in the monastery. The route from Tezpur to Bomdila, dotted with pine trees, is a feast to the eyes of the nature lovers. Bomdila is also known for its beautiful apple orchards which give the tourists a splendid experience.

There are also a craft centre having exquisite dragon design carpets, Buddhist Tangkas and masks and an Ethnographic Museum in Bomdila. Some of the tourist places in Bomdila include:

Tipi is located on the west bank of the Kameng river in West Kameng district in Arunachal Pradesh. Tipi is famous for the Tipi Orchid Research Centre. It is situated at an elevation of 190 metres. The area is surrounded by hills and natural vegetation. The vegetation type is semi-evergreen tropical rain forest. The famous Sessa Orchid sanctuary is situated 24 km from Tipi. The Kameng river here facilitates tourists with the opportunity of rafting and angling. 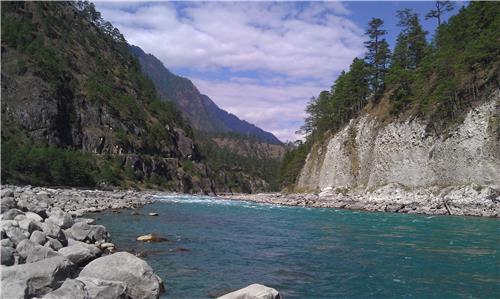 The Arunachal Pradesh Forest Department has developed an orchid Research and Development Centre at Tipi which specialises in research and development of orchids.. It was set up in 1972. The research centre has been set up for the propagation and conservation of the orchid species. Tipi is home to the tropical orchids.

Hundreds of varieties of orchids are preserved in the centre. In the areas near Tipi the bamboo orchid, arundina graminifolia could be seen blooming with pink-purple flowers. In the research centre there is the orchid glass house which has around 1000 exotic orchids displayed in pots and hanging baskets. 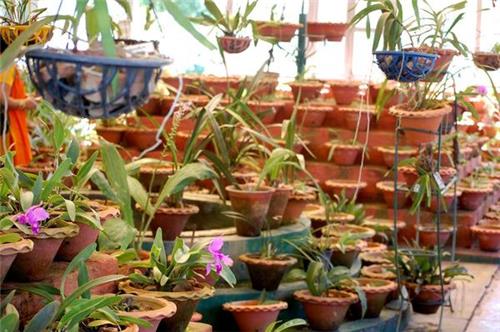 There are four-species house within the campus. About 10,000 orchid plants are under cultivation in the houses. New species of orchids like biermannia jainiana, cheirostylis gunnarii, eria connote, cleisostoma tricallosum and some others are displayed in the species houses. There are two natural orchidaria within the centre. A large number of native orchid species are found here. There is an orchid museum which exhibits the orchid wealth of Arunachal Pradesh.

View of Kangto and Gorichan Peaks

From the height of 8000 feet from where Bomdila is situated tourists can have a glimpse of the beautiful landscape and snow-clad mountain of the Himalayan range. The cloud-clad top of the Nechipu pass could be seen from the altitude of the region. In Bomdila there are the highest peaks - the Kangto and Gorichan peaks. Tourists can have a bird’s eye view of the two beautiful peaks. 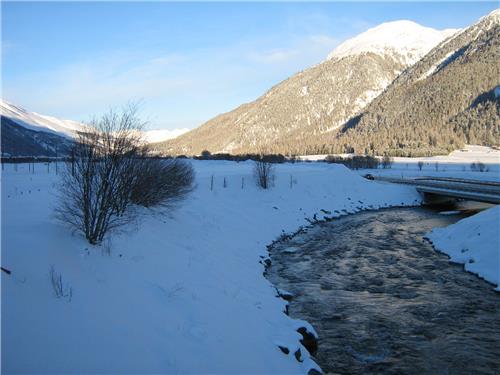 The beautiful river Bharali in Bomdila gives tourists an opportunity for angling. Mahseer is found in abundance in the river. 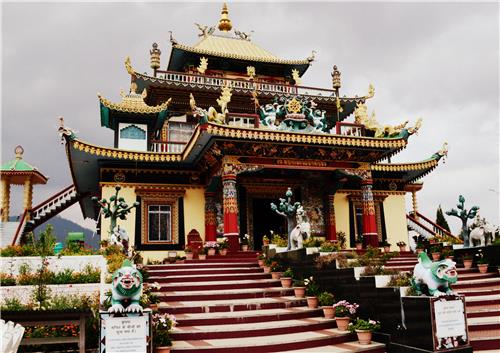 The Bomdila Monastery resembles the Tsona Gontse Monastery of Tibet. The monastery also has a temple of Lord Buddha.

The monastery is the home to the Buddhist lamas and monks. The monks are taught the way of life in the monastery. There is also residential houses for the monks. At the monastery, being the centre of the Lamaistic faith of Buddhism, hundreds of followers of Buddhist faith come every year. The monastery is surrounded by hills and natural plantation.

Pakhui Tiger Reserve is located on the foothills of the eastern Himalayas in the East Kameng district of Arunachal Pradesh. It is considered as one of the best protected national parks in the country. The sanctuary is bordered by the Kameng River in the west and north, Pakke River in the east, high mountainous ridges in the north and Assam in the south. 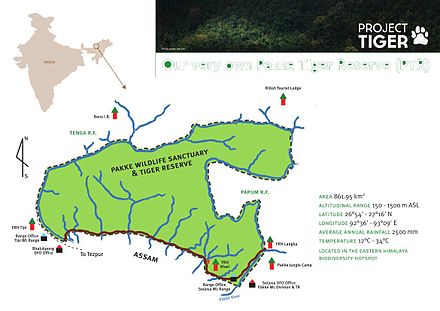 The first notification of the Pakke (earlier known as Pakhui) as a reserve forest in the Kameng Frontier Division was issued in 1962. The area was further notified as Pakhui Game Sanctuary in 1977. Pakke was declared as a Wildlife Sanctuary in 2001 and a Tiger Reserve in 2002 in recognition of the large carnivores it houses. Subsequently, this area was also notified as a part of the Kameng Elephant Reserve. There are some communities which have their houses in the adjacent of the park.

Pakke Tiger Reserve occupies 20% of the total geographical area of East Kameng district. The reserve is surrounded by contiguous forests on most sides with Tenga Reserve, Doimara Reserve forest, Nameri National park and Papum Reserve forest on different sides. The Sessa Orchid Sanctuary and the Eaglenest Wildlife Sanctuary are adjacent to this park located on the opposite side of the Kameng River in the west. The altitude ranges from 150 meters to 2040 meters in the reserve. 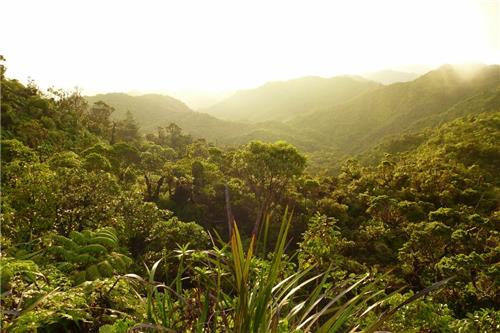 The terrain of the reserve forest is rugged with mountainous ranges in the north and narrow plains with sloping hill valleys in the south. The sanctuary slopes southwards towards the river valley of the Brahmaputra. There are dried streams and lakes in the sanctuary.

Pakke Reserve Forest experiences a sub-tropical climate. The temperature ranges from 18° C in winters to 29° C in summers. The sanctuary receives much rainfall from the south-west monsoons during May-September. The average annual rainfall is 2500 mm. The humidity levels reach 80% during the summer.

The general vegetation of Pakke Reserve Forest can be classified as Assam Valley tropical semi-evergreen forest, evergreen forests and Eastern Himalayan broadleaf forests. 234 species of flowering plants have been recorded so far, though at least 1500 vascular plants are likely to be available. There are also cane species and species like Tokko (livistonia jenkinsiana), Outenga (dillenia indica) available in the riverine areas.

The Pakke Tiger Reserve is a home to different large and small wild mammal species. Around 60 species of mammals are reported in this reserve so far. The mammals from the tiger and cat family for which the sanctuary is well known includes tiger, common leopard, clouded leopard, jungle cat, leopard car, fishing cat, golden cat and marbled cat. Apart from that, there are the Asiatic black bear, wild dog, Asiatic jackal which are also seen in the park.

There are also a large number of herbivores like the Asian elephant, gaur, sambar, barking deer, wild pig which are found in the lowlands of the sanctuary. In addition to these, squirrels, primates like Rhesus macaque, Assamese macaque, capped langur, slow loris, jackal, binturong, wild boar, Malayan grant, civets, mongooses, weasels, spotted linsang, back-striped weasel are also found in the sanctuary. The presence of the stump tailed macaque has been also reported by a researcher. 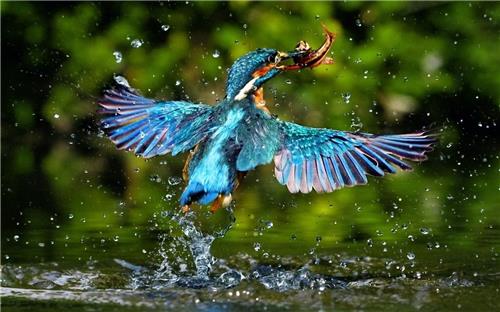 There have been several conservation programs taken up by the Nature Conservation Foundation (NCF). There are also a number of eco-development schemes, wildlife awareness and educational programs and groups which work together for developing and conservation of this sanctuary with time. 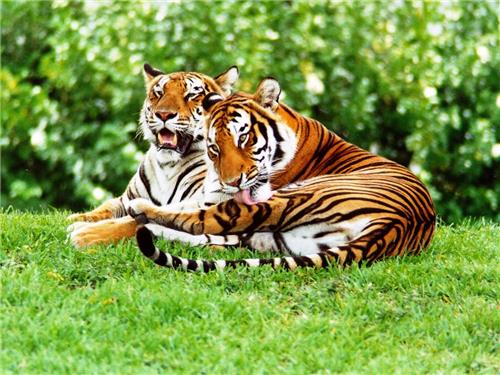 How to Reach Pakhui Tiger Reserve

By Road:
This sanctuary is well accessible by road. There are regular buses which ply to Bhalukpong. From there, one can reach easily by road.

By Air:
The nearest airport is in Tezpur.

By Rail:
The nearest railway station is in Rangapara.

Tourism in Bomdila has undergone a great boost in recent times and with the boost in tourism, the accommodation in the place has also advanced. Bomdila being one of the places with the most beautiful scenery in India has been drawing a lot of tourists from places far and wide. With the increase in the number of tourists, the hotel sector also needs development. Given below are some of the hotels and lodges available n Bomdila for tourists:

Are you a Business Owner?

Add the products or services you offer